The lens is derived from embryonic ectoderm.

The optic vesicle induces the formation of the lens placode from embryonic ectoderm (at 4 weeks). The lens placode then separates and becomes the lens vesicle. The cuboidal epithelial cells along the posterior (retinal) half of the vesicle terminally differentiate into lens fibers and fill the vesicle, forming the lens nucleus. These fibers are arranged along the visual axis. Zonules are derived from the neuroectoderm in the ciliary area (3-5 months).

All nutrients after embryonic development are derived from the aqueous humor bathing the lens. This is because the lens lacks vasculature, lymphatics, and innervation in order to minimize light scatter and promote uniform placement of lens fibers. Differentiated lens fibers lose their organelles and form a homogenous cytoplasm (also to limit light scattering). This means fibers must rely on glycolysis for energy (as well as the hexose monophosphate shunt and aldose reductase pathway). New fibers are continually produced throughout life, with newer fibers being laid on top of older fibers (primary fibers include those from embryonic development, while secondary fibers are produced from the anterior epithelial stem cells after birth).

Anterior epithelial cells also generate the lens capsule. The capsule is an elastic, transparent basement membrane composed mostly of type IV collagen (as well as laminin, heparan sulfate proteoglycan, entactin, and fibronectin). The capsule is thickest at the anterior and posterior pre-equatorial zones and thinnest at the central posterior pole. Lens epithelial cells and fibers contribute to the capsule throughout life, making the capsule the thickest basement membrane in the body.

The lens epithelium can be divided into three zones (still as a monolayer under the capsule).

Most lens stem cells lie within the germinative zone (gz) at the periphery of the lens epithelial layer just above the equator (this zone forms 10% of the anterior surface). These cells occasionally mitotically divide and terminally differentiate into secondary lens fibers. Cells lose their organelles as they differentiate into fibers, which helps limit light scattering. Fibers also dehydrate and cytoplasmic proteins become concentrated, increasing the refractive index.

The pregerminative zone (pgz) lies between the gz and cz (the cz and pgz together cover about 90% of the lens anterior surface). This is a small layer and contains some cells that will differentiate into secondary fibers. The central zone (cz) covers most of the anterior lens surface. These cells are in G0 phase (and do not differentiate into lens fibers).

The transitional zone (tz) lies closest to the equator and contains cells from the gz that have undergone mitosis and will differentiate into secondary fibers. These cells are progressively moved posteriorly as more cells from the gz differentiate. The cells rotate as they differentiate and migrate so that they become oriented end to end. Newer layers of lens fibers are thus laid on top of older fibers. 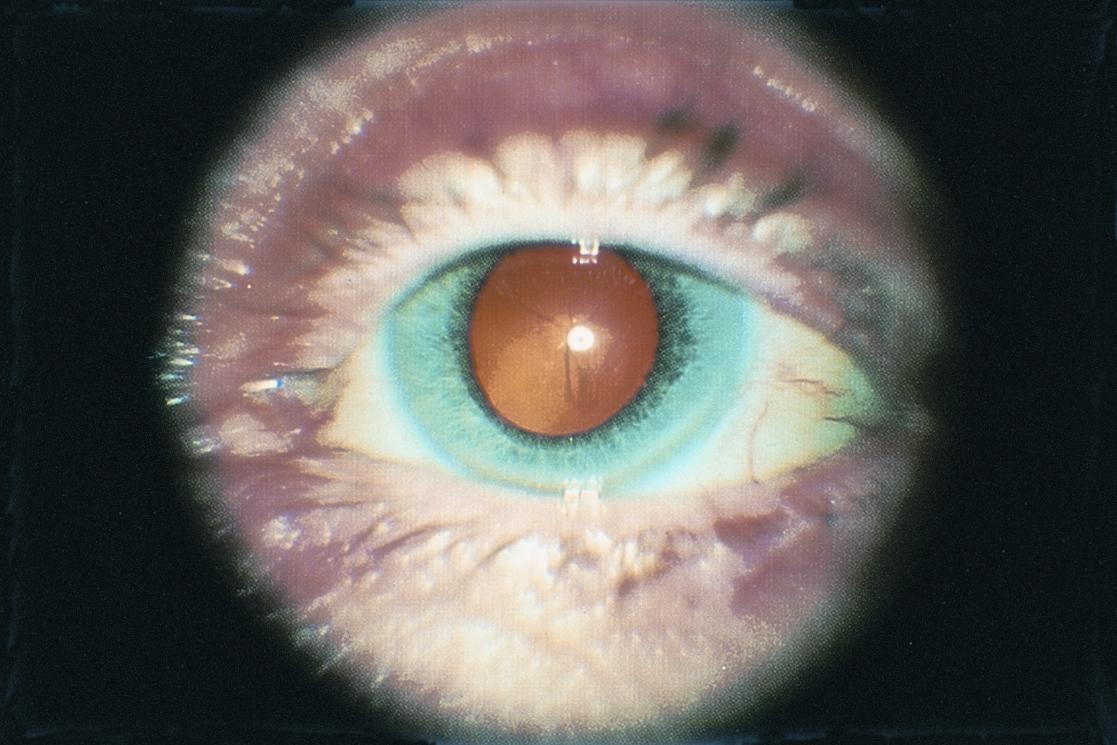 With lens growth and development come changes in lens dimensions and the refractive index.

The fetal lens is initially spherical, but equatorial growth begins to predominate later in gestation. Lens equatorial diameter is 6.5 mm at birth, grows to 9 mm by adolescence, and then remains at a constant equatorial diameter. The anteroposterior diameter is 3.5 mm at birth and grows 0.02 mm each year of life. The anterior surface of the lens also becomes less convex than the posterior surface.

These changes in lens shape and increased lens thickness contribute to the shallowing of the anterior chamber with age and can lead to an increased risk of narrow angle glaucoma in predisposed patients.

You are in Lens Anatomy and Development. Pages in this section:

Images from © 2016 American Academy of Ophthalmology and the National Eye Institute.